Creative macro photography at home with hydrogel beads… and some fun with light - Irix lenses were designed with both the effort and experience, of not only engineers, but also photographers. Swiss precision and Korean innovation create

One of my favourite topics in macro photography is water. It’s a subject universally enjoyed and its beauty, along with plenty of manoeuvrability in terms of creative freedom, attracts many keen photographers, although it isn’t an easy area to deal with at all.

It is very difficult to find water droplets that are of a perfectly spherical shape in nature; the forces of surface tension, as a result of intermolecular interactions, have a strong influence on their shape and surface. A simpler way for such creative photography is to buy ready-made transparent hydrogel beads which you can get from mail order stores, but these often have granules that have to be absorbed in the water for a few hours beforehand.

The advantage of using such spheres is undoubtedly their shape, and the fact that they can be arranged just about anywhere, set according to your preferences, and can create the most intricate compositions and photographs in the comfort of your own home.

So what you’ll need is:

A good macro lens – for example, the Irix 150mm f / 2.8, which thanks to its 11-leaf aperture, generates a sharp and detailed image while maintaining a soft, even pastel bokeh;

Pads, preferably made of a glossy material so that you get a mirror effect;

One or two desk lamps, with a diffuser;

It would be great if you can get hold of a glass-topped table, or if you know someone with such a piece of furniture. If not, then a piece of transparent plexiglass would be perfect;

Various odds and ends, such as luminous ornaments or flowers for background settings, to obtain a reflective effect on a water droplet.

You can literally shoot at any angle and lay the beads almost on any surface. But one thing you’ll need to be aware of is shooting against the window. Literally every light source can end up being reflected in a single drop, which is why I recommend shooting against a grey window. But when you have a lamp at your disposal, you don’t have to worry about not having enough light.

I should make it clear at this point that I’ll be interchanging the words ‘water droplets’ and ‘balls/beads’ as, visually, there’s no discernible difference in their appearance on camera.

Now here’s one of my methods of shooting droplets. 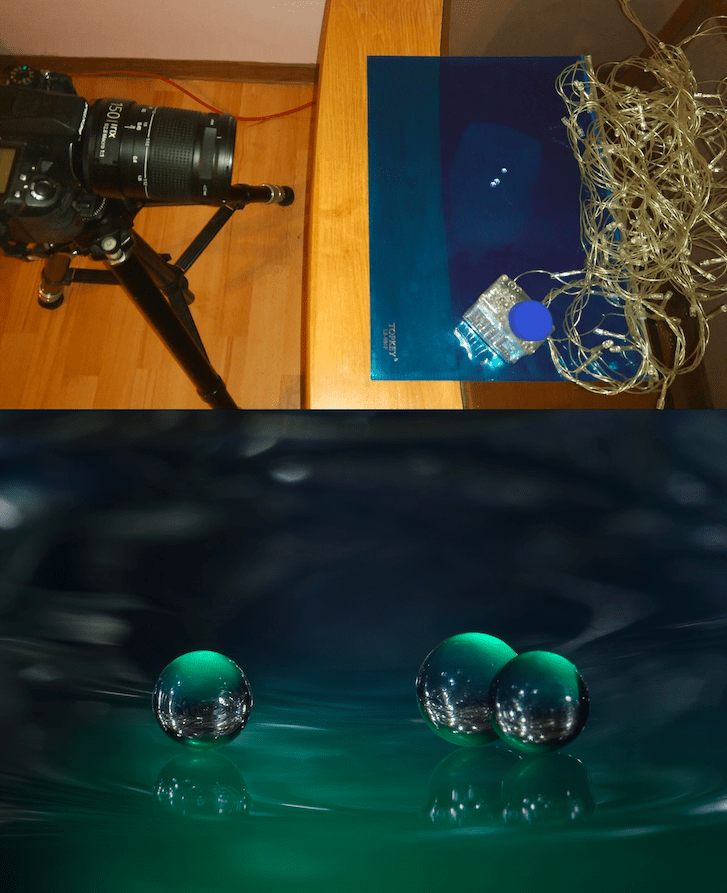 In the above I used two light sources at the back. One of them is a set of LED Christmas tree lights which, when placed in the background, reflect as single lights on the droplet, resembling the effect of an illuminated city at night. As a substrate I used a blue, slightly transparent, glossy file folder.

I placed the second light source under the glass section of the table to highlight the folder and the droplets from the bottom. This trick is the most important element in this area, as the light setting has provided two interesting effects. First, the substrate has changed the colour and texture to create an illusion reminiscent of water. Second, the falling droplets have reflected the colours and texture on the illuminated part of the substrate, thus giving a matte finish to the drop, enhancing the 3D effect.

And now for some tips:

The glass table can be successfully replaced with a simple transparent plexus set, for example, placing this on two stools and set up at a comfortable distance to photograph. But it’s also very important to allow the possibility of backlighting from below.

As a ‘backlight’ you can use various bits and pieces, and you can create excellent colour effects by changing the colour of the Christmas decorations such as the LED lights.

Use the second lamp only for lighting the stage set-up and to reduce the time of exposure.

Keep the effects on the display, but continuously monitoring to ensure there aren’t too many unwanted reflections on the droplet.

Do not remove reflections completely as these can make the droplets seem more natural.

If you want to get the effect of matte droplets as in the pictures below, you should be shooting with the more open apertures of the lens. You can only stop at f8 at 1:1 scale. 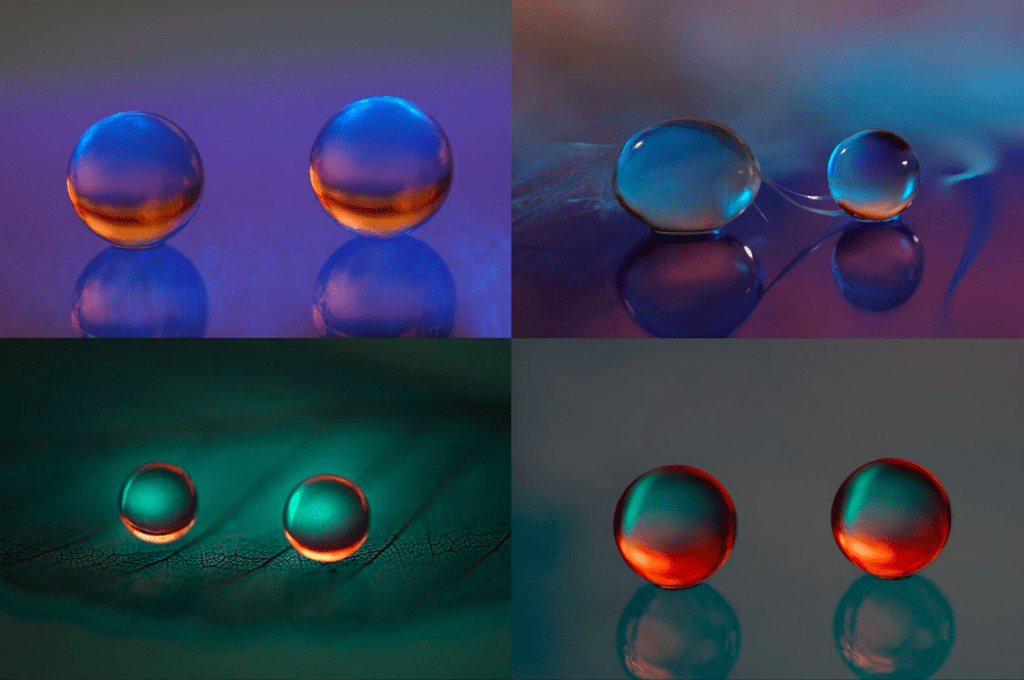 If you want to show something in a water droplet, then set this particular object in the background and it will reflect off it! If the item is protruding high above the drops … a large section of this will be in its ‘interior’. Whereas if you will lie it down … it will only be reflected at the bottom. To show what is happening within the droplet interior, it is necessary to close the aperture in order to increase the depth of field. Of course, this depends on the scale at which the balls are photographed, and on how clearly you want to show the elements in it. 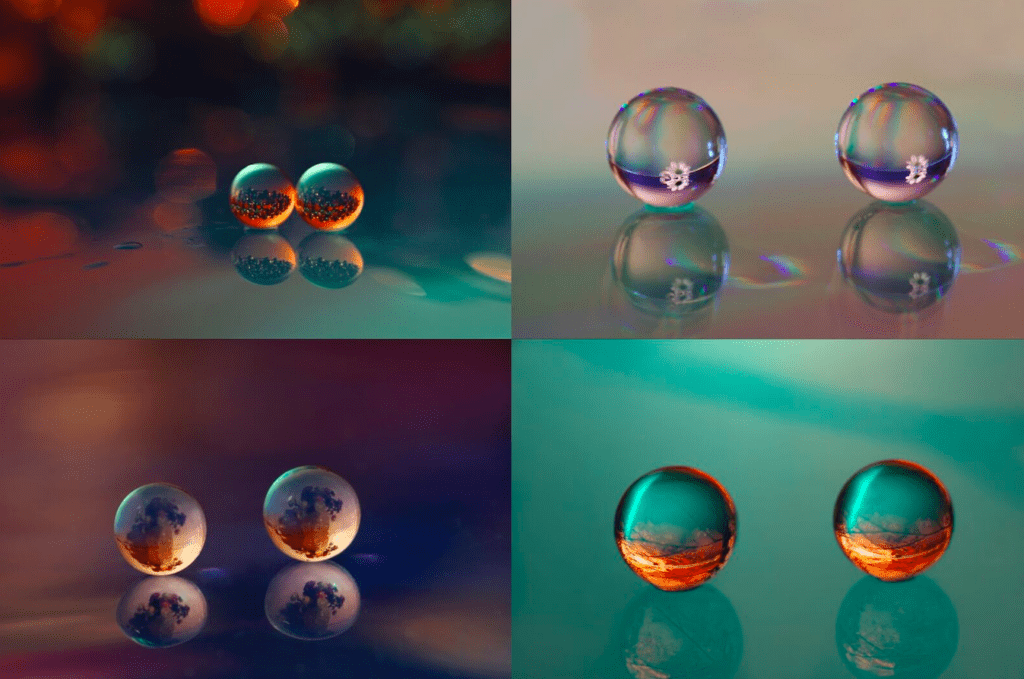 Droplets can also be photographed without lighting; or with a small percentage of light, they look like this ☺ 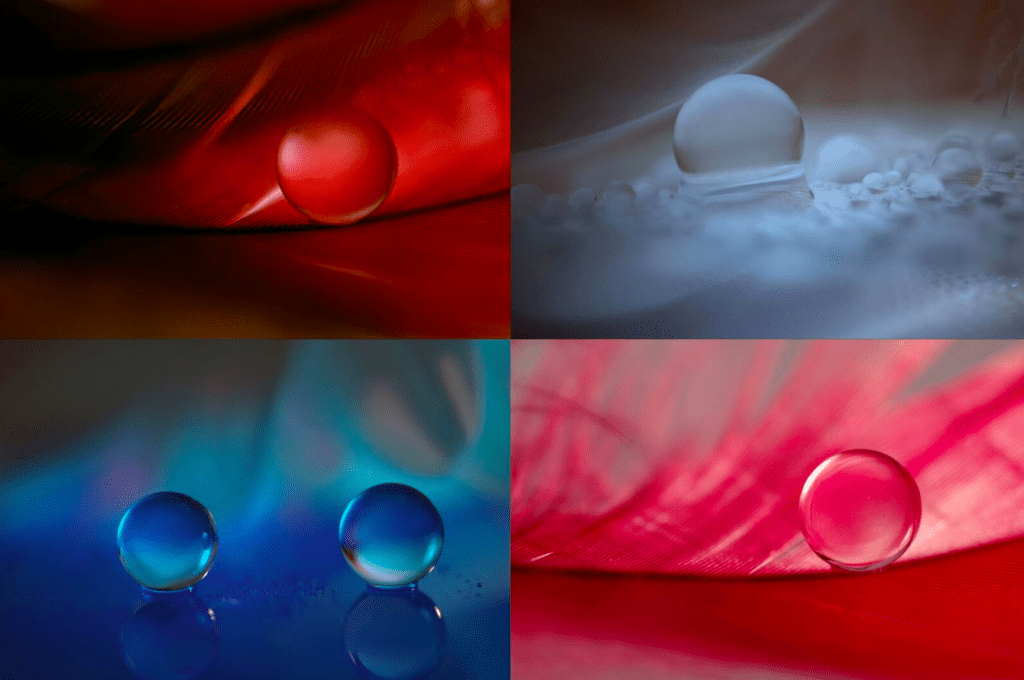 Interesting effects can be obtained by considerably closing the aperture. In a droplet, the whole texture of the ground on which it is located will be reflected, thanks to which it will look fossilised. Here, an F22, shutter speed 30 seconds – Even with such a small aperture value – the Irix 150mm f / 2.8  lens is able to generate a remarkably sharp image. 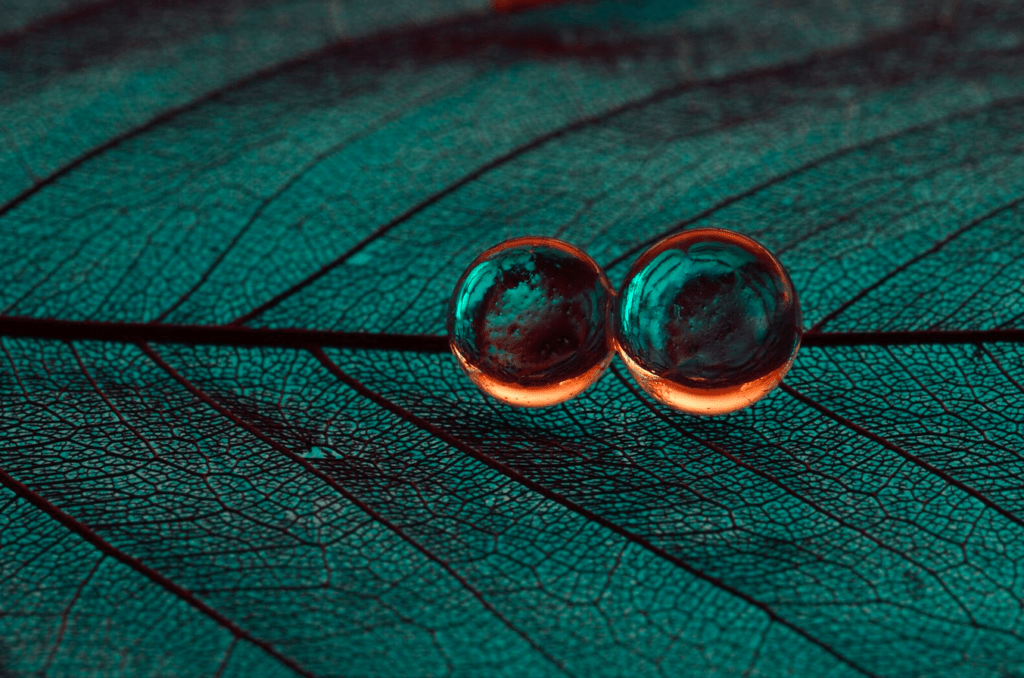 First of all, you need a tripod to take these types of photographs. You have to allow for longer exposure times so it’s practically impossible to take them by hand. You will also be helped by the remote control shutter, or using the self-timer to mute camera shake. When using a tripod, I recommend turning off the image stabilization and reduce the ISO sensitivity to a minimum. It is also very important to set the focus manually: Mode M will allow you to have full control over the scene for shooting.

Finally I want to tell you that it is great fun, and you’ll find that such precise shooting is amazingly relaxing. It’s a great way to calm yourself down, for example, after a hard day at the office.

I hope that you’ve enjoyed this article and that it’ll become a useful guide in the eventual struggle with water balls/beads/droplets… ☺, and I wish you a lot of fun resulting in some great photographic effects.